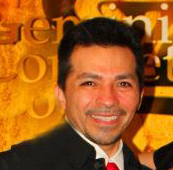 Internationally recognized Professional Dancer, Choreographer, Instructor, and Promoter, Javier Solis, is from Merida, Yucatan, Mexico. He founded the Portland Salsa Congress in 2005.  It has since developed into the premier competitive Salsa Congress in the Pacific Northwest.

Javier has been busy founding many more Congresses including in Boise, Denver, and Merida, Mexico. He has partnered with the most respected names in Salsa including Albert Torres, to ensure every dancer has the most amazing, satisfying, experience.

Gemini has opened and performed for many major Latin Salsa Stars including Oscar De Leon, Victor Manuel and Gilberto Santarosa.

Gemini and his team have also done many half-time performances for the Portland Trail Blazers and was a judge for the Blazer's Dancer try-outs.

Gemini made history worldwide, dancing on the Great Wall of China in 2007.  He was invited to tour to Beijing to demonstrate and teach Salsa dancing.  Her had such a great time, and was so well-received, he plans to make another tour back to China later this year.

His creativity and keen eye for picking up details, assist him, his partners and dance team, in producing complex, energetic and exciting choreography.

Javier has traveled worldwide and trained amazing teams. He looks forward to teaching for many more years!

Lucas Prat has taught worldwide in Bachata, Merengue, Cha cha cha and Salsa. He has toured with Prince Royce, XTreme, Victor Manuelle and has directed and taught at The Dance Company Salsako in Denver, Colorado.

Known for his technical excellence, Andre has more than three decades of experience dancing & teaching in more than 30 countries around the world. Andre is a former student of, and dancer for, Eddie Torres (“The Mambo King” and father of the NY On2 Mambo style of dance) & the world famous Santo Rico Dance Company Professional Team, both based in New York City. Andre has traveled the world teaching salsa for more than 10 years. He has worked as lead choreographer on multiple projects for the stage performances, television & movie productions.

Andre is the Founder & Director of, Seattle, WA based mambo U dance, where he continues to share his extensive knowledge of dance. The goal of mambo U is to help dancers realize and experience the pleasure of dance expression without boundaries (confidence achieved through knowledge of dance structure).If you have occasion to visit the Seattle area, don’t miss the opportunity to drop-in on one of Andre’s classes, you won’t be disappointed!

Joel Hunter began ballroom at the age of 15, learning the basics of Ballroom and Swing in Boise, ID. Eventually, he had to travel outside the local area to Portland, Seattle and Salt Lake to further his instructions via private lessons and workshops from top instructors. He furthered his skills in Lindy Hop and intensified his ballroom skills by traveling to San Francisco. There, he recieved his Ballroom Dance Teacher's Certification in Dance Vision International Association (DVIDA).

Heirloom Dance Studio was opened August of 2006 in West Boise. Since then the studio has changed locations and has reopened in downtown Boise between Capitol and 8th Street.

Since opening Heirloom, Joel has continued his training in Lindy Hop and Ballroom as well as diversifying his specialties such as Salsa, West Cost Swing and Argentine Tango.